The Houston Astros Take Off

Hey guys it’s Mike, with big news. The Houston Astros are moving from the National League (central) to the American League (west). This is the first league change since 1998 when the Milwaukee Brewers moved into the National League. This is so exciting because the I love watching the Astros play. Now they will battle teams like the Texas Rangers, Los Angeles Angels, Seattle Mariners, and Oakland Athletics. 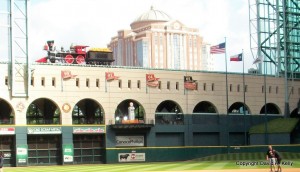 The train on top the left field wall at Houston's Minute Maid Park. You can also see the gas pump, and the hill in center field, if you look closely!

Just recently, Kate and I visited the Astros’ stadium. It was a blast (get it–the Astros were a blast? Like a rocket!)! The Astros ballpark, Minute Maid park, has a huge train on top of the left field wall. It was so cool! But more on that in February. That’s when the next Ballpark Mystery, The Astro Outlaw, comes out. As usual, Mr. David A. Kelly actually wrote the book, but Kate and I got to have all the fun visiting Houston, seeing the train, and even meeting an astronaut!

I’ve gotta go, see ya later! (My mom says I have to go clean my room, even though I’ve told her I’m working on my writing!)